Flying saucer. Project of a spacecraft. 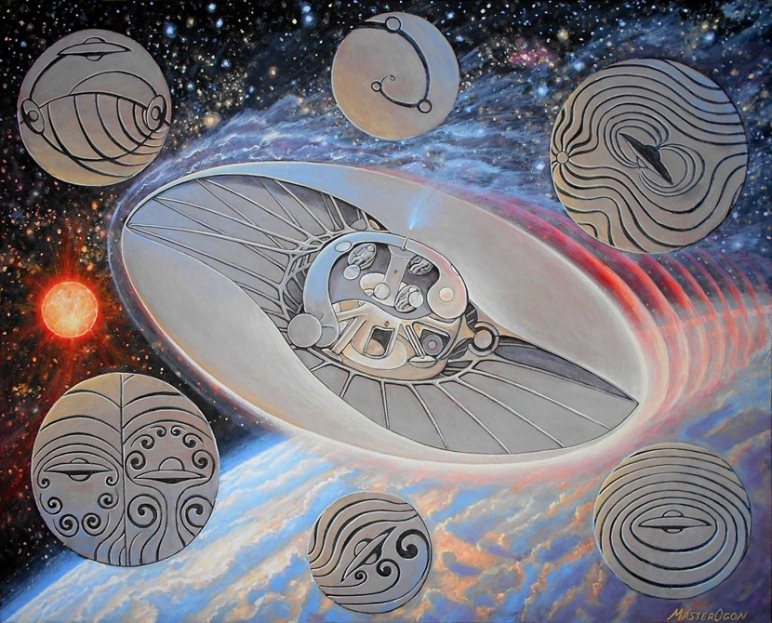 Flying saucer is a reusable air / underwater / spacecraft. The motor used on it is a movable discoid sail, driven by high-frequency electromagnetic inertial propulsion drive. With the help of the wing, the inertial propulsion drive perceives the resistance of the environment and the apparatus comes in forward motion. Thus, the flying saucer uses the principle of movement of birds, fish and other species of creatures moving in a homogeneous environment. This principle is possible in virtually any environment capable of providing resistance in which waves can be created and reflected. This allows you to effectively use the resistance of the environment due to its inertness.

For example, an airplane for the most part simply overcomes air resistance, leaving behind it an air whirlwind that lasts some time by inertia. The vortex contains energy that is not used at all. A bird creating a whirlwind with a wing wave receives back some of the energy spent on it in the form of wind, which pushes it. Thus, the bird is more efficient than the aircraft. But it is technically difficult to create a powerful and fast apparatus in the form of a bird or fish. Such designs have a large number of moving parts that do not withstand the load on friction and vibration, if you install a powerful engine on them. Unlike the ornithopter wing, the wing of the flying saucer will be able to vibrate with high frequency and low amplitude, like the membrane of an acoustic speaker. This can be achieved through the use in the design of the electromagnetic drive of the wing. The suspension of the wing on a magnetic cushion will allow you to realize greater power and frequency of oscillation with a low mechanical load.

The work of the wing in the air or water can be described as follows. The wing makes a fast ascending impulse, as a result of which a shock wave is formed above it, and the flying saucer begins to be drawn into the region of reduced pressure formed behind it. An annular vortex is formed under the wing, which follows it by inertia. Then the wing begins to make a reverse movement downward at low speed, and the flying saucer pushes off from the whirlwind, which catches up with it, carrying it upwards. 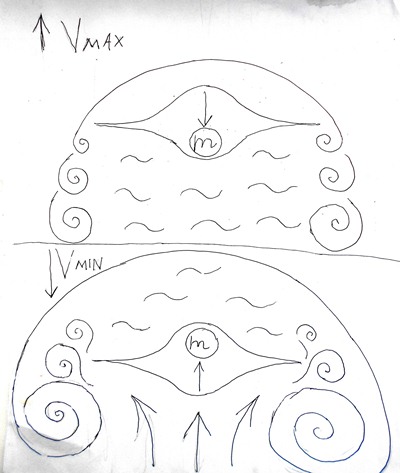 In space, a flying saucer can receive acceleration with the help of a wing in the form of a photon mirror and sail. The presence of an electron gun on board will allow the use of the wing and as a mirror of an electric sailing antenna. But unlike conventional ships that use the power of the solar wind to move in space, you can speed up flying not only by determining the pressure of the particles, but also by pushing them away.

Inertial propulsion drive works much more efficiently when there is constant resistance on one side and there is no resistance in the direction of motion. Despite the fact that the solar wind has a very low density, and in it the work of the wing will not be as effective as air or water, the pressure on it of light from only one side will allow the inertia to repel in the direction of the wind and at an angle. Thanks to this, the flying saucer will be able to accelerate and maneuver more effectively than ordinary space sailing ships. It is assumed that it is possible to generate electromagnetic waves in the direction of motion and to perceive their pressure using a sail, which corresponds to the model of motion of the apparatus in a liquid and gaseous medium.

The theory of motion of a flying saucer in a liquid and gaseous medium.

Imagine that the atoms or molecules of a liquid or gas that are as close as possible to each other as a result of compression. The only possible position in which they can be equidistant is triangles, which are combined into hexagons. This corresponds to the crystal structure of water.

Atom 1 gets a boost. Suppose that atoms move along the path of least resistance, as the arrows indicate. If these are billiard balls, then each time the impulse 1 will be divided by 3 and will lose power. But if these are atoms or molecules that oscillate, then each time during a collision, the pulse energy will increase, because the vibrating object itself creates a repulsion impulse.
Due to the repulsion of atoms, a chain reaction will occur, which will first lead to the formation of multiple vortices, the prerequisites for which are in the figure, turning into large vortices. The plate converts the force of the vortex into motion. Thus, the driving force of the saucer is air resistance.
Therefore, the energy that drives the flying saucer is taken from the air.

Development of enterosorbents for different purposes